A few weeks ago I received a book from a friend. It was Lone Wolf by Jodi Piccoult. This was my second book from the same author – the first being My Sisters Keeper. The sender gave me the book with a wish hoping that apart from learning about wolves (which I did – and will never look at them  the same way again), I had to reflect on 2 important questions;

What Is a Brain Death?

What Would I do?

It’s a story of a broken family of four. The parents divorced. The father (LUKE) continued his obsessive studies on wolves while sharing custody with his exwife (GEORGIE) of their teenage daughter (CARA) and now estranged son (EDWARD). Georgie remarried and had kids from her new relationship and Edward, who was just over 18 years old, was a thousand miles away in Thailand teaching English to the locals. Cara on the other hand became close to his father and together they enjoyed caring for the wolves.

Like it or not, they had to come together as a family when Luke and Cara got involved in a terrible accident. Cara survived with curable injuries but unfortunately for Luke – he never woke up from his coma. Or will he?

The dilemma now lies in the hands of 2 young adults – the siblings who are not on the same page and thrive on different sets of perspectives and moral values,  to decide the fate of their father. Will they wait for him to come around or would they have to legally let him go? And if they chose the latter – on what grounds?

What is Brain Death?

Simply put, it’s when the control command of your brain dies. The death of a particular part of your brain (the brain stem) which keeps you alive and aware of your surroundings, that controls your eye blinking, your act of swallowing and some as simple as breathing. Upon which once the function ceases – the person is theoretically dependent upon mechanical ventilation and medication support. Chance of recovery – almost nil.

What would I do?

Because I understand things better now – if I am certified as brain dead. Please let me go. And if I am still a suitable candidate for organ donation, then kindly proceed as planned. I would do the same for my family members.

Thank you for the book Zawani.

It is time to get acquainted with our talented writers in the local scene. Hence, I couldn’t thank enough lejenpress for restoring my faith in reading Malay genre books after Kapal Angkasa Yang Terhempas Di Subang Jaya .

But lets not be greedy. Let’s take it one step at a time and make some ground rules regarding what kind of books I’d like on my shelf. Ones that I wouldn’t feel embarrassed to share with other people or show around when visitors come over to the house. We do want to appear well read, huh? HIhihihi..

Avoid books that start with Tales of malaysian bla bla bla.. . In a way, avoid anecdote-like books. Or compilation of short stories.

Oh well. Talking about avoiding. I did start off the year with a book that himpunkan kisah2 pendek. It was by a blog writer. I was swooned by the title : Desaturasi Merah Jambu. It felt poetic and indie. I used to read Perempuan JOmblo’s blog religiously some time ago when I was a medical student but then I got absorbed into my daily routine as the nonappreciated, burnt out, love-less house officer working in a busy hospital. Thus, have missed out quite a lot over the years.

Now that I’m more stable *ahem* , I am able to indulge in my favourite pastime of scrap-booking, blog writing plus hopping and book reading. So it was nice to reconnect with her stories and boy.. a lot has happened it seems. 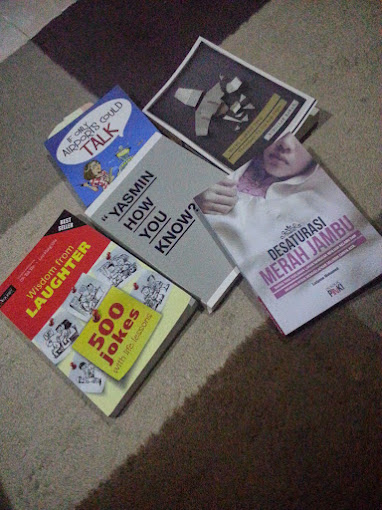 Anyway, this year will be an ode to our local writers. I welcome suggestions of books to read. Nothing too extreme I hope. Something different and mind-opening I plead. It doesn’t have to be written in Bahasa Melayu. In fact, some of our local writers write excellent English books. Here’s to a year of Buku2 Malaysia.